– The team in Baton Rogue is continuing to focus on football season tickets, splitting time between renewals and new season tickets. Last week they renewed about 200 seats and added 100 new seats. They are also crushing group sales for baseball and softball, selling 1,055 seats between the two sports last week!

– The team in the Bluegrass is focusing on football sales for the 2020 season. Last week they sold 82 new season tickets, while also starting their second touch point for the eight week renewal campaign. Also added in another 134 group tickets for women’s basketball!

– Last week the team in Atlanta focused on a late push for basketball, as the team is playing well at the right time and that led to 106 group tickets sold. They are also pitching in for football sales, renewing 82 seats and selling in 12 new seats.

– Down in Statesboro they got their AG Day for baseball scheduled out for March 28th, contacting the local 4H, FFA and Ag Businesses. Also focused on football sales, renewing 20 tickets and adding in 16 new season tickets.

– Up in Moon, PA, Camille had a big week on group sales across all sports. She sold 54 tickets for Men’s basketball, 38 for Women’s basketball and 22 each for men’s and women’s hockey. Strong all around week!

– In Charleston, Kyle is working on some upcoming group nights for baseball. Faith and Family is a big focus right now while also spending time on Youth Sports day for baseball as well as basketball. Kyle is laying a strong foundation for group sales!

The Mentality of a Great Sports Salesperson

Today in our weekly read we have an article about what makes a great sports salesperson. The two main highlights it covers is Attitude and Grit, which are two things we strive in each person we hire at Taymar. This is a good reminder of what it takes to continue to succeed in our profession.

Get To Know Your Colleague

This week we are going to be highlighting our leader at Georgia State, Alexis Campanella. Alexis started with Taymar back in June of 2019 as the GM at Georgia State and has lead that property to some impressive sales numbers, especially in the group sales side of their business.

Alexis grew up a military brat, which led her to be a well traveled child, living in 10 states and 2 countries. Growing up in this climate she leaned on sports as a way to make friends, excelling in cross country and track, and dabbling in basketball. She was the tallest girl which is why she dabbled in basketball, even though it wasn’t her strongest sport. Her senior year was her career year, totaling 10 points on the year! Alexis then took her talents to Auburn Alabama where she graduated with a Business Administration and Management degree. While attending Auburn she worked in the athletics department as the head marketing intern with a focus on gymnastics and the student rewards program. From there she relocated to Ohio University where she spent one year in marketing and sales for the athletics department and really found her passion for sales. She parlayed this position to a sales position with Legends at SMU, where she excelled and got promoted to selling Mercedes Benz Stadium for the Falcons and Atlanta United. That’s when Joe and Mark came calling and offered her the position as the GM of Georgia State.

Alexis and her husband Sam enjoy hiking with their dogs, reading, crafting and traveling. This year they are doing a travel bucket list. They have already traveled to Mexico, Bahamas and Mardi Gras this year and have plans to visit Chicago, Boston, LA, Seattle, St. Johns and Japan by the end of the year!

Alexis has done a fantastic job leading our team at GSU and we are lucky to have her on board at TSU! 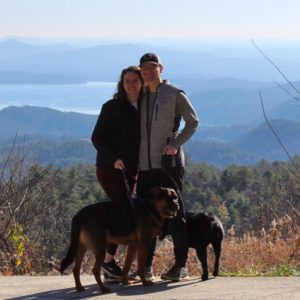 Unfortunately we do not have any NASCAR experts at TSU as no one selected the winner. The winner was Denny Hamlin, who won his second straight Daytona 500. Let’s make sure we spend more time on Sunday’s watching these guys make a bunch of left turns.